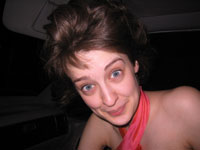 Courtney is an actor/creator, writer, and mask maker residing in Winnipeg, Manitoba, Canada. She has bachelor degrees in English and Theatre from College of the Ozarks in Southwest Missouri and graduated from Dell'Arte International School of Physical Theatre (Blue Lake, CA) in 2003. "The Tight Thong of J. Alice Prufrock" is her first poem to be published; however, an article of hers will be published in the 2006 edition of Poolside, a media arts magazine.