Home  >  Past Winning Entries  >  Choosing Life: My Father's Journey in Film from Hollywood to Hiroshima

Choosing Life: My Father’s Journey in Film from Hollywood to Hiroshima 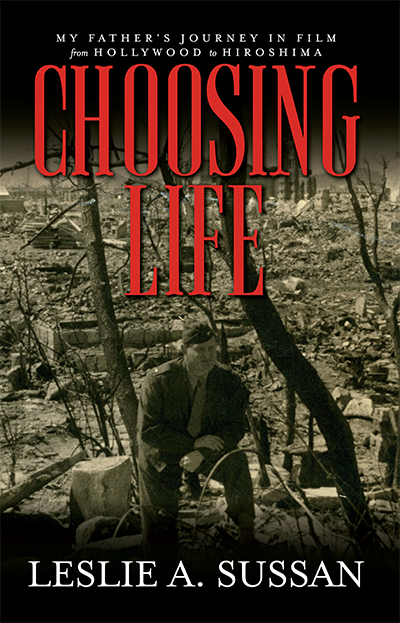 Leslie A. Sussan probes questions of historical memory and propaganda in her illuminating memoir Choosing Life: My Father's Journey in Film from Hollywood to Hiroshima. Now an appellate judge, Sussan has been a U.S. Department of Justice attorney and an advocate for migrant workers and abused children. Her intellectual clarity and balance are coupled in this memoir with a passion to right intergenerational wrongs.

This braided narrative moves back and forth between Herbert Sussan's life-altering experience as a Defense Department cinematographer filming the aftermath of the atomic bomb and his daughter's pilgrimage to Hiroshima in 1987-88 to complete the exposé he was never allowed to share.

In 1939, Herbert was a plucky teenager from a family of Eastern European Jewish immigrants on New York's Lower East Side. He followed his dream of film-making to the University of Southern California. Then World War II hit. Not a particularly competent soldier, he parlayed his talents into entertainment for the troops, but felt called to do something more serious for the war effort. His opportunity came when he joined the Strategic Bombing Survey crew to document the effects of nuclear weapons on the defeated Japanese.

The U.S. government thought Sussan's crew would be making propaganda that showcased American strength. However, the photos and films of the atrocities suffered by Hiroshima's civilians were so devastating that they were instantly covered up. Sussan no longer had security clearance to view the materials he himself had created.

According to his daughter's recollections, he became embittered and defeated by decades of fruitless petitions to bring these films to light. He had hoped that all nations would turn away from the horror of nuclear proliferation once they saw the evidence. His cynicism led him to clash with young Leslie as she became active in the protest movements of the 1960s-70s. After Herbert's death, Leslie, a newly divorced single mother, moved to Japan with her young daughter to continue his work. She collaborated with activists on the Japanese side who were also trying to break the silence around this massive historical trauma. The project brought her closer to understanding and empathizing with a man who had kept her at a distance in his lifetime.

Choosing Life is fact-filled but always livened with deep feeling. Leslie Sussan was fortunate to discover an oral history that Herbert Sussan gave to a student at Columbia University. Whereas many memoirists have to use their imagination to re-create ancestors' thoughts and experiences, here we have excerpts in his own words, as well as some of the photos he took. True to her legal training, the author builds a reliable factual record to support the moving tale that she tells.

The pacing of the two parallel stories was not always smooth. There didn't seem to be a pattern for how long we spent on one timeline before shifting to the other. While her anecdotes about adapting to life in Japan were lively and informative, to my mind they took up too much space in the middle of the book, delaying the return to what should have been the main storyline about the Hiroshima films.

The phrase "choosing life" has been taken over by the anti-abortion movement, which makes it a confusing title for a book on a wholly different topic. Only on page 277 do we learn that it's a reference to Deuteronomy 30:19 ("choose life, so that you and your children may live"). On the book cover, the subtitle is printed in such small white type above the bright red capitals of the main title that it would be easy to miss what the book was about if you were glancing at it on a store shelf.

Red type on a black-and-white photo background somehow looks "self-published" to me; it's not on trend with contemporary nonfiction covers from traditional presses. The photo of a young Herbert Sussan in uniform, sitting on a block of rubble, is low-contrast and similarly does not give enough indication of the book's subject.

Choosing Life is an excellent addition to our national dialogue about American accountability for historical misdeeds. I would recommend reissuing it with a different title and cover so that educators and history buffs can more readily discover this important work.

Buy this book at BookBaby