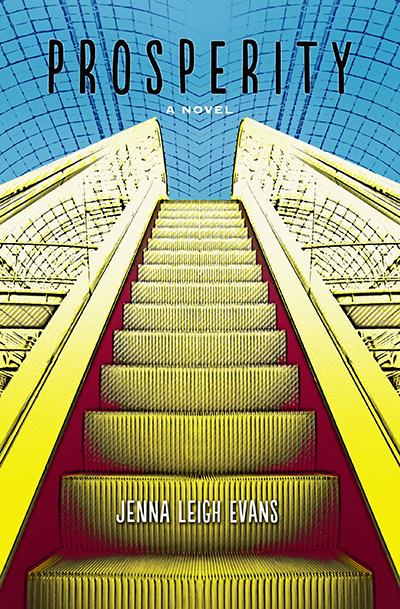 Jenna Leigh Evans' novel Prosperity combines speculative fiction, political protest, and dark humor, in the tradition of George Saunders and Kurt Vonnegut. It depicts a near-future America where the indebted masses are railroaded by government bureaucracy into a for-profit labor camp in a former shopping mall. The smell of artificially flavored cookie dough will seem sinister to you after reading this outstanding story.

The political relevance of this novel raised it to the top of the contest entry pile. Evans doesn't lecture but rather grips our attention with an unsettling juxtaposition of horror and absurdity. The premise is so plausible it makes one paranoid: if this were happening now, would we even know it, until it happened to us? In fact, minus the escalators and converted fast-food courts, America's prisons are already below-minimum-wage labor camps, and many of their inmates became trapped in the system through harsh punishments for petty offenses, not unlike the loitering citation that fatefully lures Prosperity's heroine Percy into the maw of the bureaucracy.

Percy, a quasi-homeless, curmudgeonly, intellectual old woman, was a brilliant and complex protagonist. She made a refreshing change from the unnaturally gorgeous young people who usually take center stage in adventure stories. She won me over in the first chapter when, despite the immediate problems of food and shelter, she could spare a thought to quibble over the misplaced apostrophe in the "Bargain Meat's" sign!

As she descends through the circles of temp-job hell that her captors assign her in a doomed effort to pay off her debts, Percy suffers the gradual breakdown of her psychological defenses. The changes in her were realistic and painful to watch. Stripped of cynical pride, but still nobody's fool, she is finally willing to ally with her polar opposite, the trippy New Age optimist, Lita, in a desperate escape plan. My co-judge Ellen LaFleche thought Lita was perhaps too annoying, not just to Percy but to the reader. I could tolerate her as a supporting character but would have appreciated a little more depth and transformation.

Not to spoil the ending, but I would have liked some hint that small pockets of resistance to the PROSPER program were emerging elsewhere, besides the main characters. I'm reminded of the ending of Ray Bradbury's Fahrenheit 451 where the fireman discovers other members of the resistance to the government book-burning. After the author spent so much effort to create this alternate America, it might have been an anti-climax to narrow the focus to one individual struggle at the book's close.

The print edition produced by Dog Ear Publishing was professional-looking, on good quality paper. However, the interior type was too dark and shiny, looking as though the whole book was printed in boldface, and in some spots the darkness of the text varied on the same page. The cover, designed by Suzanne Rush, was most impressive, with a very contemporary "literary" typeface and original artwork of a mall escalator in acid-yellow tones at a strange angle, conveying the book's themes of claustrophobia, mania, and fool's gold.

Prosperity was one of the most original and ambitious books we read this year. Should Evans decide to publish with a traditional press, she would be a good fit for an innovative literary publisher like Black Lawrence Books or Fence Books that is interested in futuristic and surreal fiction with social commentary. We'd enjoy receiving more entries that tackle social problems via speculative fiction concepts rather than straight historical morality tales.

William Topaz McGonagall, poet and tragedian of Dundee, has been widely hailed as the writer of the worst poetry in the English language. This site provides a comprehensive guide to the life and works of William McGonagall, including 258 of his poems... mcgonagall-online.org.uk pic.twitter.com/cx8bTGrMpp

Deadline Jul 31: To Hull And Back Competition; international, submit published or unpublished stories up to 2,500 words with "some element of humour" to win £1,200 and publication | christopherfielden.com/short-story-co… @ChrisFielden HT @hopeclark pic.twitter.com/PvcVggbOQZ

.@TheWriterMag offers a free Summer 2021 Guide to Writing Contests, with "dozens of contests for every genre, all with deadlines in spring and summer 2021. Prizes range from $25 to $15,000, and while most require entry fees, others are free to enter." writermag.com/contests/explo… pic.twitter.com/fD1n0r56XY

The Best New True Crime Stories: Crimes of the Famous and Infamous
Call for submissions: received by January 1 | Visit source