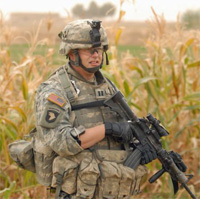 Captain (Retired) Adrian Cole is a writer currently enrolled in the Stonecoast MFA program at the University of Southern Maine. He was born in Brunswick, Maine and returned to his hometown after serving two combat tours in Iraq as an Army Officer with the 101st Airborne Division. He is currently working on two books about his tours of duty. The first focuses on a mortar platoon he led along Iraq's "Golden Highway". The second covers his time as an embedded trainer, living with a 400-man Iraqi Army Battalion in Saddam Hussein's Birthday Palace.

Captain Cole holds an M.A. in Homeland Security from American Military University and B.A. in Public Management with minors in Political and Military Sciences from the University of Maine. His hobbies include photography, fishing, and kayaking, and he is an avid New England sports fan.