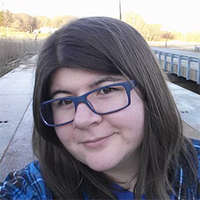 Carey Ford Compton is an MFA Candidate in fiction at Purdue University. Her works have been published in Allusions (Indiana State University) and Manuscripts (Butler University). In April 2016, one of her stories won runner-up in a prose contest hosted by Manuscripts. Carey reads for Bartleby Snopes and the Sycamore Review and will finish her MFA in 2019. She lives in Lafayette, Indiana, with her husband and two guinea pigs. Find her on Twitter.