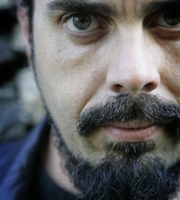 Christopher Buehlman is an actor and writer based in the Tampa Bay area. He makes most of his living playing Christophe the Insultor, a verbal mercenary whose wildly popular one-man comedy show can be found at renaissance festivals around the country. He enjoys the company of dogs but travels too much to own one responsibly, so he will happily borrow yours when he is in town.