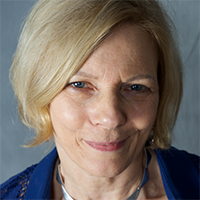 Jeanne-Marie Osterman is from Everett, Washington. After graduating from Gonzaga University, she received a Masters in Linguistics from San Francisco State. She began writing poetry during her 30-year career as an advertising copywriter in New York City. She has studied with the late William Packard at NYU, with Cornelius Eady, Mark Bibbins and others at New York’s 92nd Street Y, and with poet Matthew Lippman.

Ms. Osterman's poems and nonfiction articles have appeared in several magazines and journals including Bluestem (Eastern Illinois University), The Madison Review (University of Wisconsin-Madison), California Quarterly, and Third Wednesday. In 2017, her full-length manuscript was a finalist for the Levis Prize from Four Way Books. In 2018, her chapbook, There's a Hum, was published by Finishing Line Press.

Winning Entry: The Vultures of Mumbai