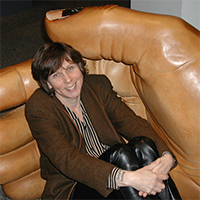 Jude Nutter was born in North Yorkshire, England, and grew up near Hannover, in northern Germany. She currently lives and works in the twin cities of Minneapolis/St. Paul, Minnesota. Her poems have appeared in numerous national and international journals and have received over 30 awards and grants, including three fellowships from the Minnesota State Arts Board, two McKnight Foundation Fellowships, the Larry Levis Prize, the Strokestown International Poetry Award (Ireland), the Robinson Jeffers Prize, and the Marjorie J. Wilson Award for Excellence in Poetry, as well as grants from the Jerome Foundation, the Elizabeth George Foundation, and the National Science Foundation's Writers and Artists Program in Antarctica. Her first collection, Pictures of the Afterlife (Salmon Poetry, Ireland), winner of the Irish Listowel Prize, was published in 2002. The Curator of Silence (University of Notre Dame Press), her second collection, won the Ernest Sandeen Prize from the University of Notre Dame and was awarded the 2007 Minnesota Book Award in poetry.  A third collection, I Wish I Had a Heart Like Yours, Walt Whitman (University of Notre Dame Press), was awarded the 2010 Minnesota Book Award in poetry and voted Poetry Book of the Year by ForeWord Review.

Winning Entry: Infidelity, For Those Held Captive for Decades in Darkness, The Map

Winning Entry: Selling Honey on the Road to Sarajevo, Love and the Hangman in Croatia, Untitled