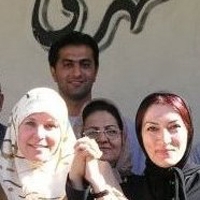 While working toward her Master's Degree in Asian Studies and History, Karima Alavi received one of ten Bicentennial scholarships to study language, history, and art in Iran. She returned to Iran in 1978 to teach English at the University of Isfahan, and became one of the few Americans who remained in the country throughout the Islamic Revolution—an experience that inspired the novel she's currently writing. Upon her return to the United States she taught at Quaker schools, including Sidwell Friends School in Washington, D.C., where Chelsea Clinton was her history student. She's currently working on her MFA in Creative Writing at Texas State University.

A frequent conference speaker, Karima returned to The Axis of Evil in 2004 as a lecturer for American educators touring the Middle East. The attached photo shows her at a kabob café, chillin' with Iranian members of Greenpeace.

Winning Entry: In the Realm of Mercy