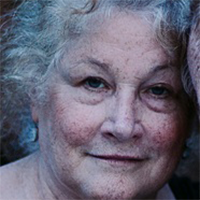 Laura Fanning is a former actress who earns her living as a Special Education teacher in Moraga, California. Work of hers has appeared in Flash Fiction World, Scholars & Rogues, Cylamens and Swords, and in the Zimbell House Anthology Pagan. Her short play, Somewhere Close to Texas, was produced by the Ensemble Studio West Theater in Los Angeles as part of their Passion Plays. She lives with her husband on an island in San Francisco Bay and is the proud mother of a rock musician and a performance artist.