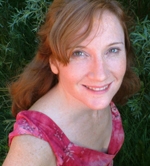 Lauded by Time magazine as "one of the new generation of intrepid young female travel writers," Laurie Gough is author of Kiss the Sunset Pig, newly released with Penguin Canada, and Kite Strings of the Southern Cross: A Woman’s Travel Odyssey, shortlisted for the Thomas Cook Travel Book Award, and silver medal winner of ForeWord Magazine’s Travel Book of the Year in the US. Sixteen of her stories have been anthologized in various literary travel books, and she has written for salon.com, The L.A. Times, The Globe and Mail, The National Post, Outpost, Canadian Geographic, and In London, among others. She lives in both Guelph, Ontario and Wakefield, Quebec.