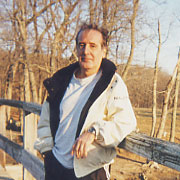 In May 1994, Condini's collection of poems, Rimbaud in Umbria, was published by Multigraf (Venice). In November 1996, his collection quartettsatz was published by VIA, Purdue University (West Lafayette, Ind.) At present he is completing his third novel, Tornado, and a selection of Modern and Contemporary Italian Poetry (1855-1955) for the Modern Language Association (New York). Read from his work at: https://web.archive.org/web/20190429132324/http://italianamericanwriters.com/condini.html