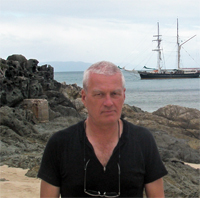 Born in England in 1950 Philip Brown paid little attention at school but did develop an appreciation and enjoyment of literature. A variety of short lived jobs enabled him to avoid embarking on a career for several years before training to become a professional social worker. He has worked mainly in this field for the last 30 years, currently in the Wairarapa Community Mental Health Team. In 1983 he married Liz at a vintage car rally in Belgium but compensated for this more settled lifestyle by living on a narrowboat in and around London for the next 6 years, before travelling overland to Manchuria to teach English. Following further travels their children Henry and Emily were born and the family moved to New Zealand. An opportunity arose to work on Pitcairn Island where he used his spare time to try his hand at writing poetry and was delighted to win the 2010 Margaret Reid prize for traditional verse.

Deadline Sep 1: Stories Out of School flash fiction contest; no fee, win $1,000 and publication in A Public Space; the story’s protagonist, or its narrator, must be a K-12 teacher; entry must be unpublished and 6-749 words long | tfaforms.com/4830855 @AcademyforTeach pic.twitter.com/s8FiPrus8Q