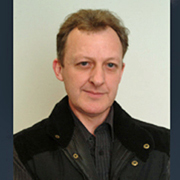 Ray Clark is the co-author of Manitou Man: The World of Graham Masterton, nominated and short listed for both the British and World Fantasy awards in 1998. the author has also had a variety of short stories published both traditionally and electronically. The Lord of Misrule & Other Stories, his first collection, was nominated for the Best Self-Published Book of 2007 in the US. Ray's new horror novel, Calix, is now available to buy in bookshops and online. Full details on the site.