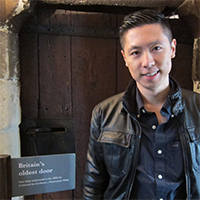 William Pei Shih is a writer from New York City. His stories have been recognized by the John Steinbeck Award for Fiction, the UK Bath Short Story Award, the UK Bridport Prize, The Masters Review Short Story Award, the Raymond Carver Short Story Contest, the Alice Munro Short Story Competition, Matrix Magazine's Lit POP Award in Fiction, the AAWW/Hyphen North America Asian American Short Story Contest, the Hemingway Short Story Competition, Writer’s Digest, Narrative Magazine, and Glimmer Train. A Pushcart Prize nominee, his stories have been published by The Masters Review, Carve Magazine, the UK Bridport Prize Anthology, the UK Bath Short Story Prize Anthology, The Des Moines Register, Reed Magazine, and Hyphen Magazine. His collection of stories Unrequited Loves was a finalist for the 2016 Flannery O'Connor Award for Short Fiction. He is a recent graduate of the Iowa Writers' Workshop and was awarded a fellowship to the 2016 Sun Valley Writers' Conference in Idaho. He lives in Iowa City, where he teaches at the University of Iowa, and is at work on a novel, as well as another collection of stories.