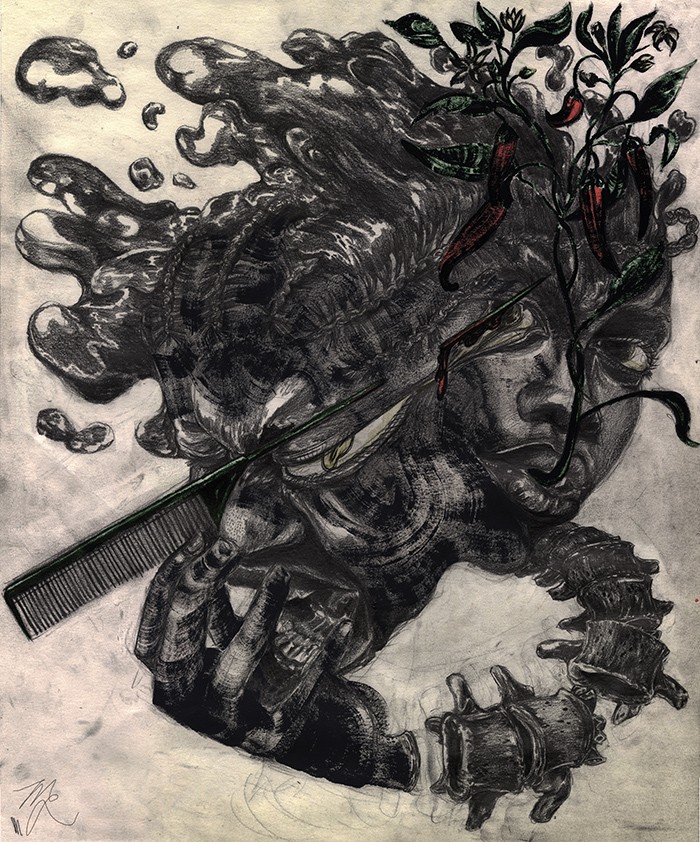 afro like a new church, a new sabbath in bathroom mirror pews, my bonnet slid back: a confession, a rattail comb caught the holy ghost of a side part.

latin like tostones. chicharron. my seasoning needs seasoning and there's no such thing as too much
sofrito.

latin like conquistador. who is my neighbor and who is his father, who got the land, like whose face
don't you see in the telenovelas? como se dice paper bag test? como se dice chattel? como se dice redlining?
are these our slaves or your slaves? fetch the interpreter.

a meaning woman. no le pegue a la negra. rape subtitled. meaning I've heard our women scream in every
language there is.

afrolatina like misnomer. like south africa. giving everything a new name and bleeding out a mother
tongue. Yoruba long beaten from my lips. Kunte skinned: toby. Heru is your new jesus and old sin. my
god is your god, my land is your land, my names are your names now.

Afrikan like say my name and say it right. Azania. Uzoamaka. like call me toby again. I dare you.

RT @FrontierPoetry: In our pursuit of gentleness, nostalgia, and a reimagining of ‘home’, Frontier Poetry is launching a new contest called “Nature and Place”. The winner of this prize will receive $3,000 + publication! 🌳🌤️ Read our guidelines: frontierpoetry.com/poetry-awards/ pic.twitter.com/aMM9oLhJ3t