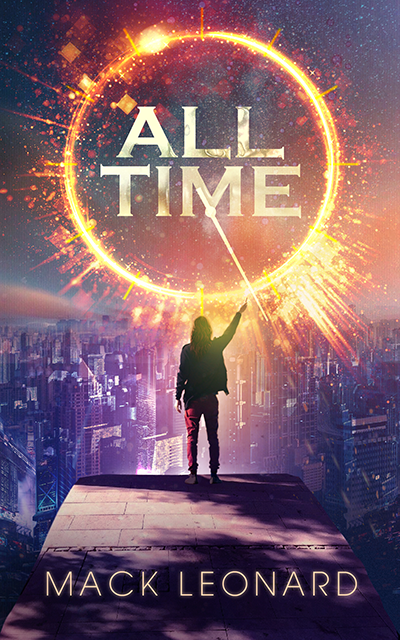 Time travel is a seemingly inexhaustible trope in speculative fiction. It's a vehicle for exploring the paradox of free will versus fate. It speaks to the hope that we could understand past cultures as they truly were, not only as a projection of present-day concerns. Miranda Hawking, the teenage protagonist of Mack Leonard's science fiction novel All Time, has to grow up fast to grapple with these questions when she's accidentally catapulted from a spaceport in the year 2397 to an English village in 1058.

In the early weeks of contest screening, I read the first chapter of this book and set it aside in the "No" pile because of an excessive number of typos. Phrases were often missing words (e.g. "what was doing" instead of "what he was doing"), or a peculiar preposition was used ("stepping back into the door"). The lyrical, evocative writing and original premise retained a hold on my memory, however, so I returned to the book a couple of months later. Though the errors unfortunately continued throughout, All Time proved to be a well-crafted and fast-paced read.

The Old Master, a nomadic painter in the Dark Ages village, was a special favorite of mine. He lent philosophical depth and a Zen-like sense of humor to this adventure tale. His apparent callousness toward any concern other than artwork masks a great heart that understands what matters most:

"The price of creation is time. Time of your life. The twilight hour you are given to express your individuality and freedom. An artwork is the ashes of your life. Each one you make, you should be prepared to die for." (pg.60)

His nobility contrasts with Brightside, the cyborg-like genius who is Miranda's first crush. Though Brightside has the mental computing power to interface with the AI's that run 24th-century society, emotionally he's your average self-pitying immature guy. Miranda's impulsive attempt to bail him out of trouble leads to the time-travel mishap that lands her in the Dark Ages. Her tenderly evolving romance with the Old Master's apprentice, Friskin, matures her into someone who puts the safety of others ahead of her youthful fantasies.

Even if we could skip around in the timeline, All Time implies, there's no substitute for life experience. Miranda learns more from her ordeals—some harrowing, some comical—in Friskin's brutal society than she did in her technologically advanced one.

A few anachronisms in the 11th-century characters' dialogue pulled me out of the story. Even accounting for how Leonard would have to modernize their English to make it comprehensible—no one wants 250 pages of Old English spelling—Friskin shouldn't be saying things like "editorialize" and "validation". Also, at one point we learn that the king is named Edmund Ironside, but the real-world English king with this name only ruled for seven months in 1016.

Though the pacing was generally tight, I wondered if it was a mistake to set nearly all the action in the 1058 timeline. I wanted to know more about the future world that the opening chapters set up, in which channelers like Brightside all eventually have nervous breakdowns from bridging the human and superhuman consciousnesses. This world is governed by an ancient multi-billionaire who will take any risk to extend his lifespan. (Elon Musk, are you taking notes?) This plausible extrapolation from current trends begs for further elaboration. Hopefully there will be a sequel, as the final pages suggest. Leonard did a good job wrapping up this story arc while leaving room for more adventures for these likeable characters.

Read an excerpt from All Time (PDF)