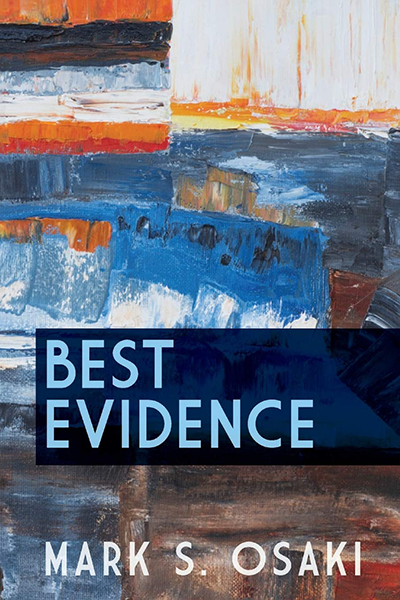 Mark Osaki's pensive, resonant poetry collection Best Evidence sifts through memories of Asian-American family life, against the backdrop of America's appetite for waging war on people who look like him.

In the opening section, the poem "Marginal Notes from a Los Alamos Journal" foreshadows the Cold War and Agent Orange with the image of God himself developing lung cancer from man's invention of cigarettes. Meanwhile, the poet imagines a snapshot of his father chastising him for poetry's impotence. Later on, he observes:

As sons we see our fathers as oceans
whose depths remain unknowable
and in whose currents we remain forever
puny and partially derived.
("Salt")

This sense of inadequacy, of decline from a past that held greater meaning and order, wafts through the collection like wisps of fog. Yet the gray is periodically pierced by hopeful moments in which an elusive intimacy is realized at last:

And if we can't believe in legends
that tell of oceans nightly restored by vapor,
we are still grateful for the mere cycle
of blood flowing back and forth...
("Salt")

The theme of artistic illusion as a substitute for faith recurs in the second section of war poems. One hears an echo of Matthew Arnold's "Dover Beach" in the ending of "For Avi, Killed in Lebanon":

...my beloved
old friend, sometimes pretense is the light
that fills the enormity of the sky.

While each of the book's four sections have a certain thematic unity, they don't strongly relate to one another as a narrative progression or a theme-and-variations, which diminished the book's forward momentum. The plain-spoken, almost aphoristic style had a clarity and restraint that balanced the heavy emotions. However, some of the poems felt too brief and sketched-in. I wanted more of the sensory richness and extended metaphor I found in "Jamaica", an original love poem depicting the beloved as a seal.

The cover art and design were attractive and looked professional. Interior formatting was messier, with inconsistent spacing between lines and stanzas. My co-judge Ellen LaFleche and I agreed that the book could have been longer and included more poems with heft and complexity. We look forward to seeing what else this talented and mature author can do.