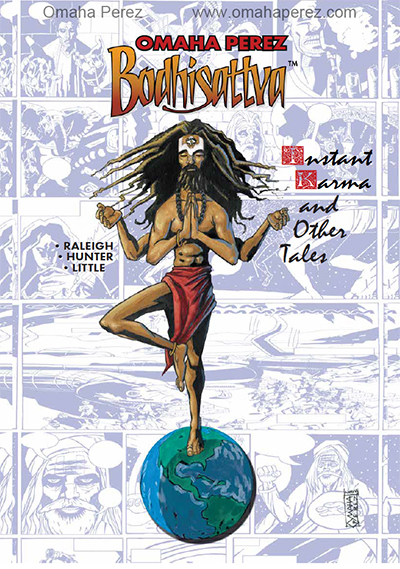 Bodhisattva by Omaha Perez is an ambitious, unsettling graphic novel in which a cosmic struggle between compassion and destruction plays out through the possessed denizens of a seedy mental hospital in 2003 San Francisco. Hindu gods and karmic debts, as well as the Buddhist notion of interconnectedness, ultimately bring forth a comprehensible pattern from the fragments of three troubled lives.

A raving, disheveled man is a familiar figure in big-city subway stations. But this man, Alex Cope, is tormented by visions that might actually be real: specifically, a godlike many-eyed man. His obsession lands him in the psychiatric ward alongside suicidal Hatar Singh, who is haunted by memories of his late wife. Completing the trio is the sadistic orderly Jack Costello, whom we first see violently killing his wife (or girlfriend) for unexplained reasons.

Abruptly cutting away from their modern-day stories, the narrative shifts to the Katmandu Valley in 1591 BC. There, aliens who may or may not be the Hindu deities select their disciples from a group of stunned monks. Pious Bodhi is chosen by Brahma, while his ill-tempered friend Rahula is picked by Kali, goddess of destruction. This begins a centuries-long combat between the two of them, with the San Francisco characters as their latest pawns.

Bodhisattva appeared to me to be in the tradition of the Underground Comix movement from the late 1960s-1970s, which included such artists as Justin Green and R. Crumb. New York City and San Francisco were major locations of this movement. Underground Comix were characterized by an anti-establishment attitude toward religion, explicit and sometimes grotesque sexuality, and an interest in altered mental states and psychedelics. Our first-round screener, Annie Mydla, compared the book's surreal and hard-edged visual style to Watchmen and Frank Miller's Batman.

Then as now, objectification of women is a frequent shortcoming of "edgy" comics. The only human female characters in Bodhisattva are two murdered wives and an unnamed sex worker being mistreated by a client in a back alley. This wasn't our favorite aspect of the book.

Using only black-and-white artwork, Perez convincingly evokes settings as diverse as San Francisco skyscrapers, the shabby and ominous mental hospital ward, and ancient India. However, sometimes the busy-ness of every panel became overwhelming. The visuals were cleaner and more spacious in the final third. Too-small print was a problem in all the top graphic narratives this year. The copy was mostly clean, with only a handful of misspellings.

We were impressed by the complexity of the ideas that this book brought together. Bodhisattva gets off to a slightly confusing start, but its initially unexplained events and jump-cut visual style seem intended to underscore the book's message that appearances are illusory and our individual lives are part of hidden karmic patterns.

Read an excerpt from Bodhisattva (PDF)

A newly revised and colored edition of Bodhisattva is nearing completion. Visit the author's website and join the mailing list to receive word of its release.