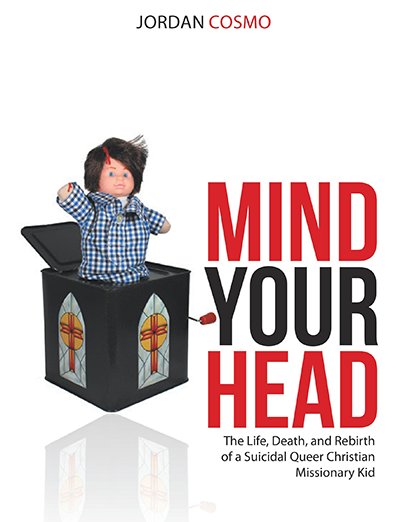 The subtitle of Jordan Cosmo's raw and politically timely memoir Mind Your Head says it all: "The Life, Death, and Rebirth of a Suicidal Queer Christian Missionary Kid". Their coming-of-age story is both funny and painful, as they document the absurdities of their Christian subculture and its stifling effect on a young butch lesbian.

Born in 1982, the middle child of five, Cosmo had only scraps of information to build a queer self-image, such as a glimpse of androgynous singer k.d. lang on a TV Christmas special. In response to the child's excited questions, their mother hedged that lang was "a woman, but she has some problems". The very word "lesbian" was just one part of the worldly reality that their family denied. From the beginning, Cosmo felt they belonged in a boy's body and wanted to wear masculine clothes. This was of course taboo in their evangelical church and family, where girls and women had to be modest, feminine, and submissive to male leadership.

When the author was nine, their father, a professor of Biblical theology and languages, moved the family to Portugal to become missionaries. They spent most of their childhood and teen years abroad except for a sabbatical year in America. As Cosmo tells it, this was a quixotic venture because the country was already majority-Catholic, but their group of evangelicals believed that Catholics were not real Christians. This section of the story is a significant exposé of the educational neglect and financial deprivation that missionary families endured while the patriarchs were off preaching. It gives the book resonance beyond the issue of sexual and gender identity.

Loneliness in a strange land sometimes drove Cosmo to suicidal despair over inability to conform to "Biblical" norms. However, the culture of silence around sexuality was also an opportunity to skirt the line with intense female friendships that became romantic and eventually physical. Yet these attachments all fell prey to the distorting effect of religious shame and hypocrisy, even the first relationships they had when they left for college and began living more-or-less openly as a lesbian. Theirs is an all-too-common story that bears repeating: familial homophobia primes young people to choose abusive partners when they come out. Fortunately, Cosmo fought their way through to a happy marriage and a post-Christian spiritual identity via a psychedelic experience of unconditional love.

Mind Your Head is an emotional read, full of personality, with an inside look at conflicts that many queer Christian youth still face. Cosmo's voice is unadorned, at times naive and unpolished, but genuine.

That being said, at 400 pages, the book needed a last round of edits to cut it by 25% and weed out the many proofreading errors. (I don't live in "Massechusettes"!) Cosmo could have skipped a lot of mundane information about food, TV shows, and minor friendships, so that the key relationships in their life would stand out more from the currently crowded cast of characters. Flooded with moment-by-moment details, the narrative sometimes becomes a blur, with insufficient transition markers to remind the reader what year this is and how old the narrator is now.

Printed by Lulu Publishing Services, the physical book was sturdy and set in a clear, readable typeface. The cover graphics from Media Parley struck just the right note of grotesque kitsch. However, the front cover image seemed stranded in the excessive white space, giving it a slightly "clip art" feel. The book spine was too plain to draw readers' attention if presented on a store shelf, and not informative enough without the subtitle. A more original and humorous title would do justice to the wit within these pages, as shown by this gem from the back jacket copy: "Like a fresh tattoo, Mind Your Head is delightfully painful...and will leave its mark forever."