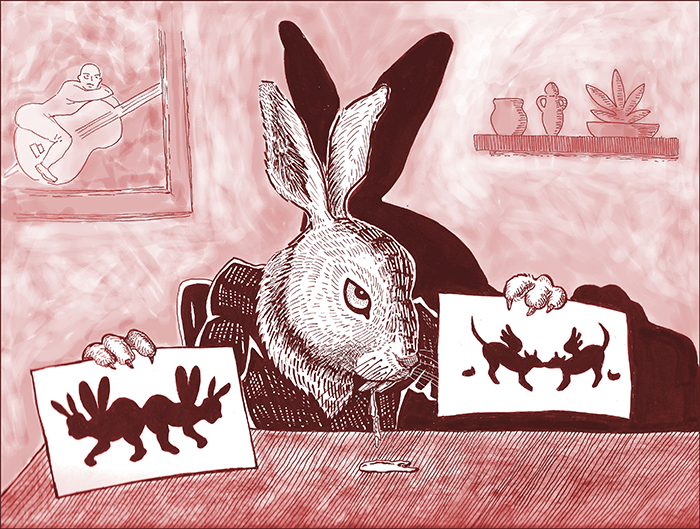 My therapist says he has to cancel our first appointment to go trick or treating. If I ever had inclinations to off myself, I never will now because he helped me understand existential freedom. Moreover, I would never do transference with him—or any therapist after that. I might do it with a really abusive heterosexual boss though, a retail supervisor who looked remarkably like Dolly Parton, or a chiropractor with BPD and tiny hands. For Aquarians, variety is the spice of life, meaning, pathology should be disguised as it rises in a different uniform each time.

My therapist says his wife is leaving him because he never got his Ph.D. His eyes are large and brown and sad, and his frantic animal pit stench fills the room. His specialty is male depression. I pretend he gets me because his sister is gay and writes "gay money" on all her paper currency. He told me this early on to show he accepts queer girls. She lives in California, and although I have never seen her, I have a vivid image of her scrawled-on bills and imagine her as a female rendition of him, smaller, without a mustache, but maybe with a sock in her jockeys. Her skin is bronze-colored and her black hair is straight and just a tad greasy.

My therapist says we should talk about my dysfunctional relationship patterns and make that a focal point of therapy. I tell her my lover has only been dead three weeks after killing herself in a hotel room. We hadn't talked about my other relationships, but I guess Max's suicide was proof to her of my dysfunction. I am proof of my dysfunction too. Ask the dust balls, my tangled mane, musty clothes clinging to the washer sides, and the bag of crumpled trash in my front seat.

My therapist asks if I desire to be more spiritual (she can teach me, I suppose). No, really, I think she thinks that as she repeatedly mentioned my need for spiritual development. So I decide to tell her about my kundalini awakening.

My therapist says to hold the buzzing boxes and think about the most important trauma as if I can rank them. I tell her all trauma bits are equal parts of the whole and that it seems a cruel thing to do to a hand, as hands are magical conduits of God energy, proof being painting pictures and other creative hand acts. Maybe buzzing feet would work better, but we never do that trick again. I'm open, actually, to having my trauma interrupted—or even shocked out of my body. I do ask her what if I had already gotten it out of my body, and how would I know if it was still there or not, and if it is not there, could I injure myself or my energy with shocking boxes?

My therapist says her orgasms are spiritual as if that could trump my kundalini awakening, and we were having a spirituality/enlightenment contest right there in therapy. I tell her kundalini energy is not the same thing. And kundalini awakenings often accompany crisis, which I have experienced for four consecutive years. Orgasms, on the other hand, generally don't accompany life crises, energetic rewiring, or paranormal experiences—and they come from a different source. She looks disappointed, and I immediately wish I hadn't said anything.

My therapist reiterates that her orgasms are a God experience. I congratulate her with my eyes, I think. I don't know what to say really. I wonder if there is such a thing as a kundalini-awakening therapist. I am glad she has orgasms but only superficially.

My butch therapist says I couldn't possibly know what my violent girlfriend's diagnosis was, although she could even without meeting her. She shakes her finger to and fro emphatically, and I focus on her dirty fingernails. Therapists are like doctors that way—one couldn't possibly know what they know after their years of studying and expertise. She is fired two weeks later, and I am given the Christian therapist, who is not like a regular Christian, she indicates, but a progressive, new kind of Christian, one that even a left-wing queer might like. Later I find out she attended Liberty University.

My therapist says I am keeping my deceased lover here with my grief, my pining. I assure her I don't have the ability to keep anyone anywhere. Then I write Max a blessings letter as proof I am not selfishly tying her to the planet. She is free to fly and do as she pleases. I CC it to my therapist.

My therapist says her dog shit everywhere, and she had to change clothes before coming to the session. I tell her that to even speak of shit makes me gag, so she continues to share shit stories including how her husband had a seizure in bed, and how she black-bagged all the bedding including the expensive purple duvet which she threw into the trash. My therapist has a very hard life, I believe. But still, I wish she wouldn't talk about shit. It makes me sick.

My therapist says I need kindness in my life and so brings a banquet of food to my session and spreads it over a table. I feel like my chest might collapse, and everything goes weak. The orange Jell-O and dishes of Thai eggplant and papaya salad tremble like a mirage along the wall. Thai is my favorite food. I thank her and eat. Then each session she brings more food.

My therapist says the rooms are overbooked and would I like to meet in a restaurant and she'll buy me dinner. I feel kind of weird but am in a bit of a desperate place and agree. The waiter brings water and chips and treats us like we're on a date. Afterward, I feel a bit dirty and fear the vast asphalt parking lot might devour me on the way to the car. I can never remember what we talk about, only that it is not what I need.

My therapist says she is having boundary problems with me but doesn't want to sleep with me. We are in a regular room with chairs and no buffet laid out on the table. The absence of food is a sure sign there has been a shift. I want to tell her I am not interested in fucking her if only to balance a thing that feels off-kilter, but I just nod quietly as I think it's probably best not to bring trays of food to my sessions. She tells me she wants me to be in her family. If she really doesn't want to fuck me, I'm glad. I feel morally superior for not telling her I don't want to fuck her either.

My therapist tells me to join a women's group at a local church she claims is "liberal". Skeptical, I contact the church who assures me homosexuality is a sin. I pause therapy for several weeks to ponder the advice, the masturbating son, the shit on the purple comforter, and what the purpose of therapy might be. My therapist is a very nice woman and trusts that the world is good and kind and that people are basically like her. She repeatedly calls my dead lover my friend after I ask her not to. In her head, everyone is a friend, and we are all moving towards a higher good, even the homophobes in the church and the mean lady at the desk who always says I didn't pay when I did.

My therapist tells me she has to leave town for a few months but offers to do phone therapy with me 'til she comes back.

My therapist tells me first session he is gay and fucked his brother. I wonder what it has to do with me or my therapy, and while I don't particularly care who he fucks or what, I find the image of him nakedly fucking anyone a bit macabre. He also tells me musicians are mostly narcissistic assholes and that being great at a thing does not make one a great person. His boyfriend was a cellist; he had firsthand experience, and while I never met him, I probably agree with the latter part of the therapist's deduction.

My therapist doesn't do phone therapy with me after all and sends me a two-liner text saying there's been a change in plans—I'll have to find someone else. I texted a laconic response and never saw her again, the most expressive words being "boundary issues" and "patient abandonment".

My therapist is also my violent girlfriend's therapist. We are doing couple's therapy as if a mediator might be like a magician who can fix a lifetime of pathology and transform monsters into angels. One session, I say I like the therapist's running shoes, and that night, my girlfriend tears the house to bits accusing me of flirting with her.

My therapist later tells my girlfriend her mind is sick and distorted, which is true, so of course, we never go back. She leaves a hole in the shingle siding next to the door that night.

My therapist tells me the COVID talk is alarmist and people always freak out when a new virus hits. I tell her in early March it will be a pandemic and that I have felt for several months the economy is going to collapse. She tells me I have an overactive imagination and that economists are always making projections. She smiles, laughs, throws her head back, and tosses her hands in the air, then swivels in her chair as she looks at her schedule.

My therapist tells me she loves me, but only in the God and loving-everyone way, not the other kind.

My therapist says over the phone we will be doing phone therapy instead of in-person for a short time because her coworkers are concerned about exposure. We talk for a few minutes and schedule an appointment for the following week. It feels weird talking with no visuals. I keep feeling a black curtain flash as we speak. It almost has a sound. Almost.

My therapist says at our Monday phone appointment she has decided to retire and will no longer be my therapist. She says it just wasn't in our cards, and that she has been laid off because of COVID and after announcing her sudden desire to retire. Also, in a few weeks, someone from the clinic may or may not call me with a replacement therapist. We talk for a few minutes and hang up. I step outside into the light and wander to my overgrown garden. The weeds tangle above my knees, and the maple tree branches droop from the burden of their blossoms. It's early April. Dust from the traffic rolls over the grass and settles in the glow of sun. Frogs start to sing, yet I'm unable to picture tomorrow or tomorrow or tomorrow.

This poem first appeared in Diode.