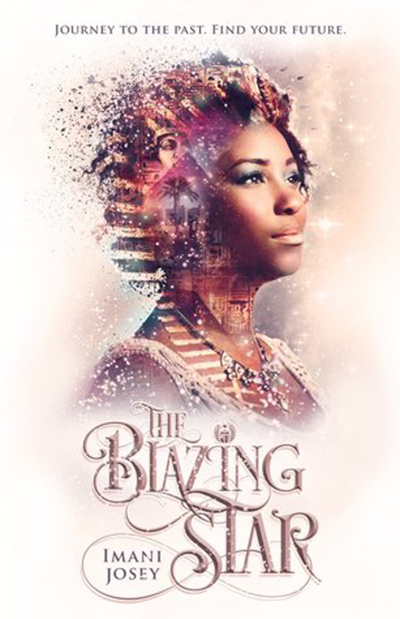 Imani Josey's The Blazing Star is a paranormal Young Adult novel with strong female characters who share complicated bonds of love and rivalry. The book opens at a high school in contemporary Chicago where Portia, the narrator, struggles to individuate from her fraternal twin sister, academic superstar Alexandria. Their teacher shows them Egyptian artifacts that magically transport the twins and a classmate to ancient Egypt, where Portia discovers her paranormal powers. The girls ally with priestesses in the temple of Isis to resist an evil magician who is plotting a royal coup. Portia's budding romance with the young Pharaoh ends the book on a cliffhanger for the next installment of the series.

The girls' adventures were suspenseful and their emotions were realistic for their age group. Though they were smart and resourceful, they were clearly still teenagers, unable to resist irreverent jokes and immature jealousy at times. Magic is not an easy solution to problems here: using their powers takes a physical toll on Portia and other characters with paranormal abilities, raising the stakes for their decisions under pressure. The book makes a positive contribution by depicting women with a variety of well-delineated personalities and ages, working together to save Egypt from chaos.

Despite enjoying fantasy fiction, I'll admit I was disappointed when this book turned out to be a time-travel story. Black girl nerd protagonists like Alex are under-represented in YA. I would have learned so much from a story that was just about the girls' lives as contemporary high school students. In the opening scene, she becomes the first African-American teen from their high school to win a prestigious academic award. What an interesting opportunity that would have been for the author to explore issues of belonging and identity. The skills and conflicts set up in the modern-day chapters don't end up having enough relevance to their adventures in Egypt. Alex's wish to return home, versus Portia's inclination to stay somewhere she finally feels important, should have been foregrounded earlier in the tale.

The world-building was where this book fell short for us. Ancient Egypt didn't feel different enough from the here and now. The physical environment, especially the hot weather, was vividly described, but the mood of the society—people's mannerisms, social boundaries, political anxieties, prejudices—never came into focus. The history and art of this long-lived civilization tell us that it was quite formal and hierarchical, so the ease with which Portia and Alex were accepted into the temple's inner circle didn't ring true. It seemed unlikely that the young Pharaoh would be so emotionally intimate and down-to-earth with a foreigner of unknown background.

This book had an attractive cover design with a smiling young black woman in Egyptian garb and an ornate typeface suggesting an upbeat fantasy-romance. This was one of the nicest interior book designs we saw, with an easy-to-read typeface and original scarab-shaped motifs in the chapter headings. Both are credited to Steven Meyer-Rassow. The physical book from Wise Ink Creative Publishing was sturdy and professional-looking. However, the text contained too many typos. Based on the simple, relatable writing style and the lack of on-page sex or graphic violence, The Blazing Star would be a good read for tweens or younger teenagers, though rather long for this age group at 286 pages.

Read an excerpt from The Blazing Star