Home  >  Past Winning Entries  >  The Cricket Cries, the Year Changes

The Cricket Cries, the Year Changes 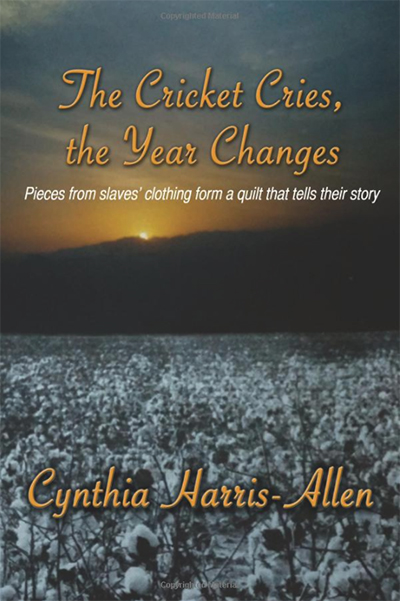 The Cricket Cries, the Year Changes by Cynthia Harris-Allen is a powerful historical novel about slavery, set on a large plantation in Macon, Georgia. The book is organized into sections that focus on the experiences of individual slaves. Each section is divided into small chapters reminiscent of the Bible, an irony that becomes clear as the slaves deal with outside attempts to convert them to Christianity. The characters become increasingly linked to each other as the novel progresses. The "narrator" who opens and closes the novel is an old quilt on display at a competitive quilt fair. This creative literary device honors the skills of a slave named Kaffie, the plantation seamstress who memorializes deceased slaves by lovingly stitching together snippets of their clothing. With each stitch, the characters' lives link to each other in deep spiritual and physical ways. As the quilt tells us in the prologue: "I have memories to share."

Full disclosure: there is terrible violence here but it was necessary to describe the astounding inhumanity of the plantation owner and his overseers. The violence was never gratuitous but may be difficult at times for some readers to process. This is especially true for readers who are moved by the strength, creativity, and endurance of the characters.

Here a group of slaves is escaping from the plantation:

"The rhythm of our running was timed by how our pant legs swished against each other; the skirts of the women were held high and hurled left to right. Feet hit the ground hard. Sharp rocks, fallen twigs, and nutshells assaulted our soles. We slid and slipped in the muddy areas as we grabbed the huge fronds of the ferns for balance."

The above passage is an example of a writing style that is lyrical, imagistic, and plot-driven. The characters are both real and mythical and include, among many others, a woman who races a horse, a one-handed man with herculean strength, and a slave named Abraham who has a son named Isaac.

The writer's choice to eschew traditional dialogue shows the level of her skill. It's hard to write a compelling novel without the benefit of characters who speak. Despite the lack of speech within traditional quotation marks, I couldn't stop turning the page and loved how each character shone through with intense individuality and strength. The lack of speech serves as a potent symbol of how slaves lacked a voice in all aspects of their lives and were verbally disempowered by not being allowed to read or write.

I learned many new facts, such as the specifics of making molasses, processing sugar cane, and using indigenous dyes. But most importantly, I learned about resistance. This novel is a powerful tribute to ceaseless resistance. Being caught while escaping brought unspeakable torture to the characters. Yet, they kept on running. They kept on running. And running.

Quilt-making was an apt metaphor running throughout the novel. Historically, quilt design provided important information to escaping slaves on the Underground Railroad. Kaffie the seamstress used her needle and thread as real and symbolic resistance. In short, this was one of my favorite books in this year's contest.

The physical book has a strong binding and a readable print that could be a bit darker for comfort. The margins are quite small and there are a few formatting inconsistencies. The title honors an African proverb about the seasonal reappearance of crickets; including crickets on the cover might have been compelling. The cover depicts a cotton field at sunset. The image is somewhat blurry and doesn't seem to convey the intensity of this extremely compelling book.

The book needed a thorough round of editing to fix a number of grammatical and syntactical problems. Comma usage was inconsistent and caused confusion at times. The writing style was choppy in places but could have easily been smoothed out for consistency. I hope the writer seeks an agent for her next writing project. She deserves a wider audience and has the potential to be an important novelist.

Excerpt from The Cricket Cries, the Year Changes