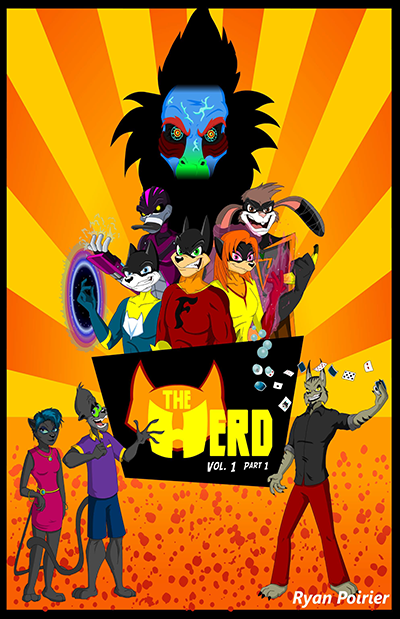 If you like furries, BoJack Horseman, Animaniacs, or juice bars, have I got a story for you: Ryan Poirier's graphic novel The Herd, a madcap spoof of superhero comics, in which a fruit juice company's secret ingredient sets off a city-wide war between good and evil mutants.

Maple City's denizens are humanoid animals (or animal-headed humans, depending on how you look at it). The cornerstone of their economy is the Foxy Fruits company, headed by protagonist Fox Canidae and his buddy Jack Lepori. The charm of anthropomorphic animal stories derives from our humorous recognition of similarities between human behavior and animal archetypes. True to type, Fox is fast-talking, bold, and creative with the truth, while the good-natured Jack is literally hare-brained.

The trouble starts when Professor Doctor Monkey-Shine, their head of R&D, persuades the board to approve a product line of genetically engineered, hallucinogenic fruit-vegetable juice. (Like I said...hare-brained.) Unfortunately for them, but fortunately for the reader, it's actually a plot to give superpowers to an evil cabal that wants to rule the city. But the secret ingredient goes astray and comic mayhem ensues, of course.

One wouldn't expect that this goofy premise could sustain 500 pages of entertainment, but for me, it certainly did. The story has numerous supporting characters and side plots but doesn't feel cluttered or hard to follow—a problem that sunk some of the other ambitious sagas in this year's contest. The Herd proceeds like a classic TV cartoon series, where the overarching conflict is mainly a context and an excuse for ridiculous gags. For instance, Jack discovers that his super-strength includes the ability to generate fruits and vegetables out of his body. Fox's wife Vixie, who can shoot heat rays from her hands, is stuck with the moniker "Emergy" instead of "Energy" because of a typo in the text message to the superhero-suit designer.

The classic visual language of cartoons is partly derived from minstrel shows and racist theories of physiognomy. Contemporary creators need to think critically about which genre tropes they replicate. Though some entries in this category had more polished artwork than The Herd, this book rose to the top because its humor was always good-natured and never employed negative caricatures based on ethnicity, gender, or body shape. The female characters were feisty, intelligent, and not sexually objectified.

Characters' facial expressions were amusing and easy to read, and I could always tell them apart. My co-judge Ellen, who isn't a regular consumer of graphic novels, found this more difficult. We thought the "cast of characters" pages should have been moved up to the beginning

Some of the color choices interfered too much with the legibility of the text. Light-colored typefaces are always harder to read. When Max Drake goes into robot mode, his speech bubbles turn black with aqua type—manageable in the online version that can be magnified, but very hard to understand in the print edition.

If there was one thing that made us hesitate about this entry, it was the poor proofreading. In addition to typos and inconsistent punctuation, on several occasions a word or phrase was incorrectly written as a sound-alike word with a different meaning: "ease dropping" for eavesdropping, or "seize" for cease. These errors could mislead younger readers who are still learning to spell, which is a shame because The Herd is just the kind of book I could enjoy reading along with my 9-year-old. In fact, he picked it up on his own while I was judging the contest, and really got a kick out of Jack Lepori's antics!

Read an excerpt from The Herd (PDF)