Home  >  Past Winning Entries  >  The Sea Is Quiet Tonight

The Sea Is Quiet Tonight 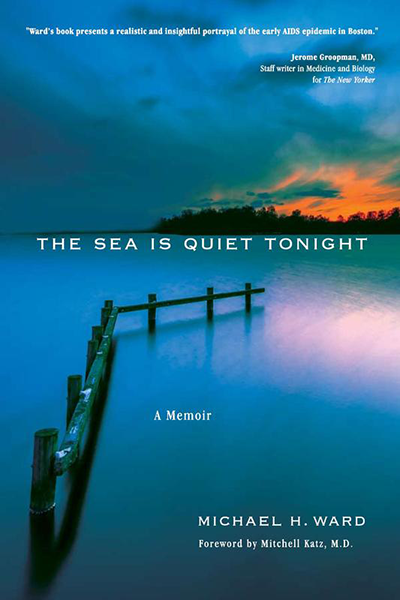 When they met in a crowded beach house in September 1981, Michael was a therapist in Boston and Mark was a former teacher trying to actualize his dream of being a full-time boat captain. They had an instant connection that took them both by surprise. This older generation of gay men had had few role models for imagining a future with a long-term partner. They quickly took the leap into becoming a couple, but their bond would be tested by incompatibilities in their life goals and the nonmonogamous relationship style that was common in their community. By July 1984, Mark was dead.

In the manner of a true tragedy, the book derives narrative tension from the contrast between the readers' knowledge and the characters' ignorance of what is to come. When Mark catches the "flu" during the couple's idyllic vacation in Puerto Rico, we feel the significance of a moment that the protagonists will only recognize in hindsight.

Though the fatal disease is waiting in the wings, it stays offstage for the first half of the memoir, which is devoted to Michael and Mark's whirlwind romance and the decidedly imperfect partnership that evolved from it. At times, the author's psychological analysis of their relationship dynamics becomes too talky and spelled-out. More time could have been spent instead on the political context, such as acknowledging the authors' privilege relative to other early victims of the disease. Their money worries were sometimes incongruous with their luxurious lifestyle of foreign travel, sailing, and living in an expensive city.

The writing style was lyrical and polished, with detailed place descriptions and atmosphere, and fully fleshed-out minor characters. Mark's quirky Jewish family, more gay-affirming than many families of that time period, provided a heartwarming touch. The book cover photo of an ocean sunset, saturated with blues and oranges, had a melancholy beauty. We appreciated the absence of typos and the concise storytelling. This looked like a professionally published book. While the impact of AIDS on middle-class white men is territory that has been already covered in the literature, this insightful and deeply personal account reminds us that everyone we lost was a unique and precious individual.

Excerpt from The Sea is Quiet Tonight