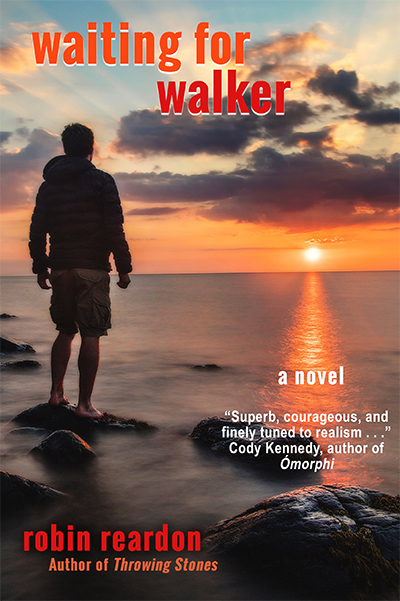 Robin Reardon's earnest, heartwarming Young Adult novel Waiting for Walker educates readers about religious and gender diversity through the eyes of Micah, a gay teen from a working-class family on the shores of Long Island Sound. When the book opens, Micah has a lot on his plate. His parents' marriage recently failed from the stress of losing his older brother, Dylan, a soldier who was deemed killed in Afghanistan. Micah's coming out to his father hasn't gone well. His mother is drinking too much and spending money on a psychic who promises that Dylan is alive. And Micah has fallen for Walker, a mysterious golden boy who owns a sailboat and has a secret: he's intersex.

If this sounds like too much for one kid, you're right. At times it feels like too much for one book, as well. The romance between Micah and Walker is put on hold by the latter's family, who are concerned about the class differences and believe Micah is pressuring their child to choose a male gender identity. Meanwhile, Micah and his parents suddenly have to adjust to the return of a close family member who has converted to a very traditional version of Islam, and his new foreign-born wife who wears a veil.

Both are intriguing storylines, sensitively handled, that bring welcome diversity to the gay male romance genre ("M/M" to its fans). Either theme would have been enough to carry a single book in what could have been a series about Micah's coming of age. Side by side in the same volume, the plotlines jostle each other for space. Walker is kept offstage for a large section of the book while Micah's family resolve their issues. There isn't much overlap between the storylines, in terms of causal connection or characters, so it might have been better to split them.

A good romance pairing complements each other's strengths and vulnerabilities. This holds true for Walker and Micah. Though Walker has more economic privilege by far, his parents have overprotected him and made him somewhat passive, compared to the self-reliance that working-class Micah has had to cultivate. Fighting for this new relationship gives Walker a reason to grow more backbone. Micah has been afraid of the ocean since he was bitten by a shark as a child. He (somewhat unrealistically) faces and overcomes this phobia in order to share Walker's love of sailing. I admit I'm not a fan of exposure-therapy storylines, because the myth of "facing your fears" is very often used in public discourse to invalidate the accommodations that people with clinical anxiety, PTSD triggers, or sensory processing disorders genuinely need and deserve.

Because of the sex scenes, this book might be best for older teens and new adults. It was somewhat long for a YA read at 350 pages. The cover design, an ocean sunset with a young man in silhouette watching the waves, was colorful and appealing, and captured the mood of teenage yearning. The blocky dark orange typeface on light orange paper on the back cover was not as readable as it could have been. In all, it was an upbeat read that taught me some new things about other cultures and life experiences.

Excerpts from Waiting for Walker