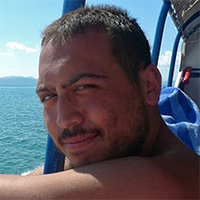 Adam Karlin is a full-time freelance writer. His journalism has been published by outlets like the BBC, NPR, and Christian Science Monitor, and for the past decade he has written guidebooks for Lonely Planet, covering three continents and dozens of locations. Over that time he has dispatched from Mongolia, the Philippines, Malaysia, Alaska, Kenya, the American South, Hawaii, and Cameroon, among many other places. His creative nonfiction has appeared in Catapult and multiple anthologies, including The Places We've Been: Field Reports from Travelers Under 35, and Inheriting the War: Poetry and Prose by Descendants of Vietnam Veterans and Refugees. He is currently an MFA student concentrating in fiction at the University of New Orleans, where his awards include the Gulf Coast Association of Creative Writing Teachers' first place graduate fiction award, finalist for the Samuel Mockbee Creative Non-Fiction award, and semi-finalist for the Halifax Ranch Fiction Prize. He lives in New Orleans with his wife, two children, and a pet lizard.