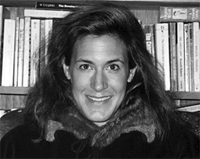 Adrie Kusserow lives in Underhill Center, Vermont with her husband and two children. She is Professor of Cultural Anthropology at St. Michael's College in Colchester, VT where she teaches courses on Refugees, Poverty, and Culture, Illness and Healing. She and her husband and some of the Lost Boys of Sudan that resettled in Burlington, Vermont helped start Africa ELI (Education and Leadership Initiative) which focuses on building gender equality through girls education in South Sudan. She has taken students on service learning trips to Uganda, Sudan and Bhutan. She received degrees in Comparative Religion (M.A.) and Social Anthropology (Ph.D.) from Harvard University and studied poetry at the Bread Loaf School of English in Ripton, Vermont.

Adrie Kusserow is also a poet. Her first book of poems (Hunting Down the Monk) was published by BOA Editions, Ltd. as part of their New American Poets Series and her second book (Beneath the Sky, the Longing) which features many poems about Sudan and Uganda, is also forthcoming with BOA. Adrie Kusserow has been published in The Best American Poetry, The Kenyon Review, The Sun, Salmagundi, Harvard Review and Anthropology and Humanism. She has won numerous poetry awards from the Society for Humanistic Anthropology and is a teacher and reader of ethnographic poetry and literature.

Winning Entry: The Country of Your Garden