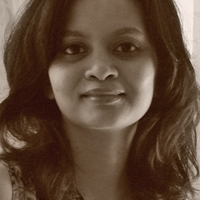 Anindita Sengupta grew up in Bombay and now lives in Bangalore, India. Her poetry has appeared in Pratilipi, Kritya, Asian Cha, Quay Journal, Muse India, Talking Poetry, and in several anthologies. In 2008, she received the Toto Funds the Arts Award for Creative Writing. A writer, journalist and communications consultant, she also runs and edits Ultra Violet, India's first online community of young feminists. More at http://aninditasengupta.wordpress.com