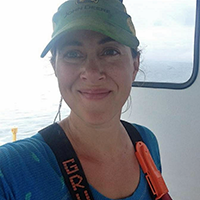 Anna Cranage Conathan is a writer and performer living in Portland, Maine who has recently launched a second career as a sternman on a lobster boat. When she's not hauling traps, she's making the rounds in Maine's stand-up comedy scene and working on various screenplays. Prior to a maternal hiatus, Anna worked as an actress, comic, and screenwriter in New York and Los Angeles. She has pushed gurneys on "ER", opened for Paula Poundstone, performed in the Montreal Comedy Festival, worked as an in-house writer for Disney Animation, and penned screenplays and TV scripts for Disney, Sony, Warner Brothers, and Paramount. Anna also enjoys storytelling and has performed with Mortified.

Winning Entry: Out of Sync at the Kitchen Sink