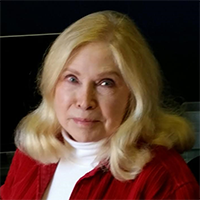 Before turning to less soul-sucking work, April Kelly was a TV writer and producer, starting out as the lone female on the original staff of "Mork & Mindy", and finishing up as one of the creators of the long-running "Boy Meets World" and the recently axed "Girl Meets World". Her short fiction has appeared in numerous literary journals as well as being featured on the podcast Word Crimes and in the Mark Twain House online magazine. One of her detective books was a finalist for a Shamus Award, and Winged won first place for general fiction in Kindle’s 2014 International Book Contest.