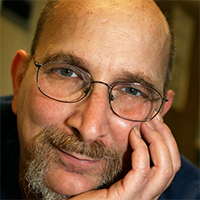 The greatest thing that ever happened to Art Rosch was his awful childhood. He had no choice but to get angry, rebel and follow his path to becoming an artist. His first duty as an artist was to cultivate obsessions. He proceeded to do this with gusto and learned that there is no substitute for a good obsession or addiction to gain insight into human nature. He managed to stay out of jail and psychiatric hospitals. It was a girl who inspired him to write poetry. It wasn't until he was twenty six that he realized he could write novels. Prior to that he had been a jazz musician, a multi-instrumentalist with vast curiosity. Writing has been the refuge of his later life, after forty. It took him that long to wear out his obsessions. They had gotten out of hand. Part of a writer's apprenticeship is to spend at least twenty years being mentally deranged. Art was rendered functional by means of long and intensive therapy.