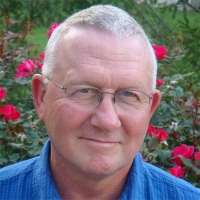 Bob Johnson holds an MFA from the Iowa Writers Workshop. He took a disgraceful, extended break from writing short stories to follow several career paths, the most notable of which were an English professorship at Goshen College in Goshen, Indiana, and Operations Manager at WSBT-TV in South Bend.

He came to his senses in the last year and is now writing fiction full-time and having the time of his life.

He lives in South Bend with his wife Cindy and his dog Ellie. His other hobbies include playing golf (badly) and gardening (occasionally successful). He has two sons, two daughters-in-law and two granddaughters, and he is looking forward to the arrival of two grandsons within a week of one another in December.