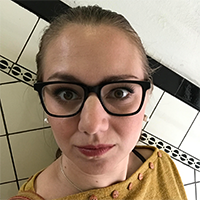 Cady Vishniac is an English and Jewish studies doctoral student and an Endelman/Gitelman Fellow at the University of Michigan in Ann Arbor. Her stories have won the contests at Lascaux Review, Greensboro Review, New Letters, Ninth Letter, Mid-American Review, Salamander, and New Millennium Writings, and also appear in Glimmer Train. She has attended the Kenyon Review Writers' Conference twice, the Slice Literary Writers' Conference on scholarship, and Tent: Encounters with Jewish Culture's creative writing conference at the Yiddish Book Center in Amherst, MA, where she workshopped with Sam Lipsyte and האָט גערעדט דאָס מאַמע-לשון מיט נײַע חברים (spoke the mother tongue with new colleagues). Cady will be in residence at the Vermont Studio Center this winter. She's working on Yiddish translations of stories previously published in English, as well as a novel about the BDS movement.

Winning Entry: No One Said It Would Be Easy