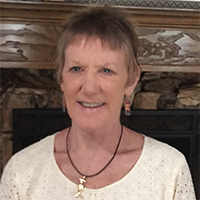 Cynthia Stock retired after 43 years in Critical Care Nursing. During her career she pursued creative writing through various institutions and mentors. She enjoys being a 71-year-old who writes fiction and nonfiction gleaned from fragments of an ordinary life. Short works have appeared in Memoryhouse, Shark Reef, The Manifest-Station, Lunch Ticket a-la-carte, HerStry, as well as several anthologies. The Final Harvest of Judah Woodbine was published in 2014; it follows the challenges faced by a polio survivor long before PTSD was identified, including the accidental shooting of his wife. Her current work in progress is autofiction, Clocked Out: A Nurse's Life After Hours.