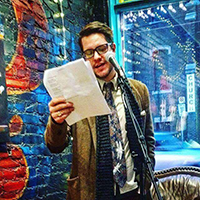 Born in Saint John, New Brunswick, Canada, Daniel Kincade Renton has been published in journals and anthologies such as Prism International, Hazlitt, CV2, Hamilton Arts & Letters, The Fiddlehead, The Malahat Review, The Fish Quill Poetry Boat 2010-2013, and Sifted: A Collection of Work by Participants at the Banff Centre Writers' Studio, 2011. Milk Teeth, his debut chapbook, was published by Frog Hollow Press in late 2015. Daniel holds an MA in Creative Writing with a speciality in poetry from the University of New Brunswick. Since 2015, he has been host and curator of Common Readings at the Belljar Café in Toronto, Ontario. He is also currently completing a PhD on Jacques Derrida, poetics, and postsecularism at York University in Toronto. Daniel is pleased to note that this will mark his first publication in the United States.