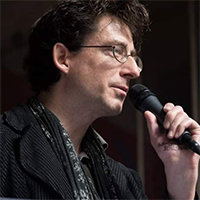 David Leo Sirois is a Canadian-American poet who wrote and performed in Paris for seven years, where he hosted a weekly multi-art open mic on the Left Bank, called Open Secret. He now hosts the global open mic, Spoken World Online. His work has been published in four countries (USA, France, England, and the Czech Republic) in several languages. Poems have appeared in journals such as The Poetry Village, The Sunday Tribune Online, Ariel's Dream, Winning Writers, The Opiate, Silo, Those That This, THE BASTILLE, Belleville Park Pages, Paris Lit Up, and Terre à Ciel (which also published his translations from the French of Paul Valéry and others). Altogether, he has had 86 publications, including his work in The Keystone Anthology (England), and the anthologies Vignettes and Postcards from Paris and Becoming Fire: Spiritual Writing from Rising Generations (Boston). He is currently submitting two manuscripts for publication and writing two more.

Winning Entry: I Hear the Bank of America Singing