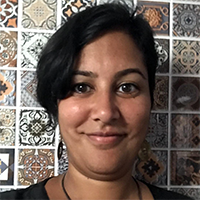 Debayani Kar is a cis, queer and South Asian writer, performer and storytelling strategist who makes her home between the US and India. Her family is originally from India and Bangladesh and she grew up in Knoxville, TN. Debi's recent artistic endeavors include writing and performing two full-length solo plays in New York with her Hussie performance project.

From 2015 to 2018, Debi was in the leadership of the New York-based YKR Collective, serving as co-director and cast member in YKR 2016 and cast member in YKR 2015. She has performed across New York and in San Francisco. Debi is at work on a short story collection about modern sex, love and romance, as well as a new play that will debut in Mumbai during the city's annual queer pride celebration in early 2020.

Deadline Nov 16: The CLMP Firecracker Awards for Independently Published Literature are given annually to celebrate books and magazines that make a significant contribution to our literary culture | clmp.org/programs-oppor… via @CLMPorg with @submittable pic.twitter.com/GlKNfv5QB7