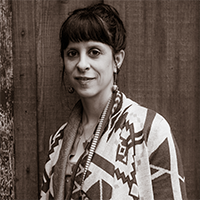 Debbie Weingarten's writing has been featured in The New York Times, The Guardian, The Economic Hardship Reporting Project, Longreads, Guernica, New York Review of Books, and many other online and print outlets, including the 2016 and 2017 Best of Food Writing anthologies. She was a finalist for a 2019 James Beard Award for Investigative Reporting and has been twice nominated for a Pushcart Prize. She is currently working on a memoir-in-essays and two novels.

Winning Entry: A Garden in the Desert