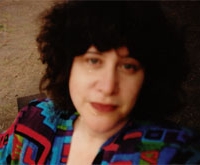 Dinah Kudatsky was born and raised in New York City. As a child, she dreamed of living on a country lane, riding a horse to school, and falling into piles of leaves, none of which was possible in Spanish Harlem. Perhaps that was where fantasy and literature took over, and where Dinah learned how to re-invent the world through the written word. Between childhood and the present, she has been enjoying her adventures as a psychotherapist, designer/facilitator of writing & healing workshops, singer, song and jingle writer, astrologer, and ever-hopeful peacenik. Though she has a license in social work, there are other times when she has fallen through the holes of her resume. Dinah has won several awards for poetry and has had some of her pieces published in a number of small presses. She enjoys dark chocolate, singing doo-wop harmonies, and smashing imperialism in her own modest way. Dinah lives in Amherst, Mass., though she considers herself more a NY escapee than a New England transplant. Whenever she walks into the world and loses her way, she drops little crumbs of poetry to the ground as she goes, to be sure to find her way back home.

Next time, she will try to write an anti-war poem which is even louder than a B-52.