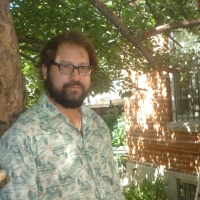 Eliot Khalil Wilson's poems have been published in dozens of journals. He has won a Pushcart Prize, two fellowships from the National Endowment for the Arts, and awards from the Poetry Society of America and the Academy of American Poets. His first book of poems, The Saint of Letting Small Fish Go, won the 2003 Cleveland State University Poetry Center Prize. His audio chapbook, The Lunatic's Left-Hand Man, is forthcoming from The Golden Walkman Press. He currently lives in Golden, Colorado.