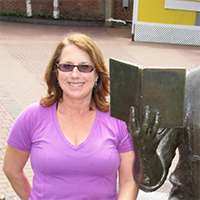 Ellen Girardeau Kempler is an award-winning nonfiction writer and poet. After a 25-year career in nonprofit communications, a layoff inspired her to enroll in a poetry workshop in Ireland and launch her website, Gold Boat Journeys (Creative Cultural Travel). Since then, she has organized trips around events such as writers' conferences, book and music festivals, and literary anniversaries and holidays. As an active environmentalist, she champions active, sustainable, culturally immersive, car-free travel. In the past few years, her wanderings have taken her to Chile, Israel, Jordan, Iceland, Germany, West Africa, France, Ireland, Canada, Costa Rica, Mexico, Japan, and around the US. As @placepoet on Instagram, she has published at least one photo and accompanying haiku from wherever she happens to be every day since January 1, 2015. She enjoys interacting with writers, word-nerds, artists, scientists, comedians, lit lovers, and other creative iconoclasts on Twitter as @goodnewsmuse, as her company mascot @littlegoldboat, or as her alter-ego, @brendanwayfarer, an Irish archaic languages scholar, Viking fan, and champion bog snorkeler.

Her first poetry chapbook, Thirty Views of a Changing World, will be published in 2017 by Finishing Line Press. Her poems have been published in Phoenix Rising Review, Orbis International Poetry Quarterly, Spectrum, Arrow, and a number of other small presses. They have also been shortlisted for the Tucson Festival of Books Literary Prize and Ireland's Fish Poetry Prize (judged by Billy Collins) and have won three first-place awards and one second-place award in the annual Laguna Beach Library Poetry Contest. In 2016 one of her poems won the Blackwater International Poetry Prize, an award that comes with an all-expenses paid trip to Cork, Ireland, to read at the 2017 Blackwater Poetry Festival. Another poem received runner-up recognition in the 2016 Writer's Digest Writing Contest. Her travel writing, essays, opinion pieces, and feature articles have appeared in The Atlantic, L.A. Times, Christian Science Monitor, Huffington Post, Culturetrip, Transitions Abroad, Westways, and numerous other publications.

Based in Laguna Beach, California, she enjoys hiking, gardening, baking, reading, and volunteering for theaters and other community groups. She believes in poetry's power to reach hearts, change minds and move people to action.

Winning Entry: For a Catfish (after Fukushima)