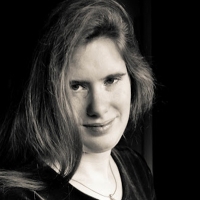 Emily Rose Cole is a poet, songwriter, and fairytale enthusiast originally from Emmaus, Pennsylvania, though she now lives in Southern Illinois. Common themes in her work include fairytale retellings, emotional violence, and terrible things happening to birds. (Despite this, she really loves birds.)

Her poems have appeared in a variety of publications, including Jabberwock Review, Ruminate, Gulf Stream, Weave Magazine and many others. She is the grateful recipient of the Jabberwock Review's Nancy D. Hargrove Editor's Prize, Ruminate's Janet B. McCabe Prize, and Philadelphia Stories' Sandy Crimmins Award. She teaches composition and creative writing at the University of Southern Illinois Carbondale, where she is currently an MFA candidate.

Before coming to SIUC, Emily double-majored in English and French at Mansfield University of Pennsylvania and lived in Toulouse, France for nine months. She grew up with folk music, and was a member of her father's folk band, DayBreak, from the time she could sing. Her debut album, I Wanna Know, was released in 2012 and is available on iTunes and Amazon.