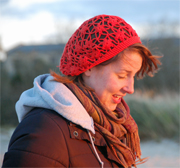 A recent Master's graduate of Harvard University, Erin Neil strikes fear into the roots of thriving houseplants and is perpetually ten minutes late. A Bostonian for six years, Erin recently moved back to the rural hills of western Massachusetts, where the renegade cows in her backyard greet her every morning. She spends her days as a case worker for her "gents" with developmental disabilities, but she's pretty sure they've taught her more than she's helped them. Erin is a minister's daughter: her cool, poker playing preacher-father modeled how to break stereotypes from an early age, and adamantly insists—despite her protests—that, someday, she will be a writer. Erin struggles to find a way to bring writing into her counseling/human services profession and has several inklings of how this could be done, which she dreams of bringing to fruition. But truth be told (to herself and to her dad), she would love to have the means to just be able to write.