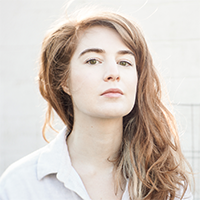 Hannah Louise Poston is a poet and essayist. She has an MFA in poetry from the University of Michigan Helen Zell Writers' Program and a BFA from the University of North Carolina at Chapel Hill, which she attended as the Thomas Wolfe Scholar in Creative Writing. Hannah has taught poetry and writing as the Writer-in-Residence at St. Albans School, at The Pennsylvania Governor's School of the Arts, and at the University of Michigan; she has also received residencies and fellowships from The MacDowell Colony, The Ucross Foundation, The Virginia Center for the Creative Arts, Wildacres, and Sleeping Bear Dunes National Park.

Hannah's work has won Hopwood awards in both the nonfiction and poetry genres, and she was the recipient of the Helen Zell Writers' Program 2016 MFA thesis prize for poetry. Her work has been featured on Poetry Daily and her poems have appeared in several literary journals, including Ploughshares and The Yale Review. Her nonfiction has been featured on Longreads and appeared in The New York Times.

Adjacent to the pursuit of poetry, Hannah has worked as a tango dancer, a clothing designer, a scriptwriter for Sharna Fabiano Tango Company, the production designer for Tango Silent Films, and an actor in the Brooklyn-based avant-garde theatre troupe Sponsored By Nobody. She is well known in the North American Argentine tango community for her work as a teacher and performer of tango, and for her handmade tango clothing. She also reviews makeup on YouTube.

Originally from the North Carolina mountains, Hannah spent significant portions of her childhood living in Pennsylvania and in a Palestinian neighborhood in East Jerusalem. She currently lives in Los Angeles. Follow Hannah on Instagram.