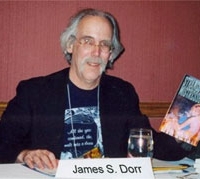 James Dorr's more serious fiction and poetry can be found in his collections, Strange Mistresses: Tales of Wonder and Romance and Darker Loves: Tales of Mystery and Regret (Dark Regions Press), as well as in numerous magazines and anthologies. Wednesday is a large gray and black tabbycat whose favorite toy is a plastic fake spider. Together they reside in Bloomington, Indiana.

"To Wednesday" was composed using the BBC/Hitchhiker's Guide to the Galaxy website's Vogon Poem Generator (Vogon poetry being considered, according to The Hitchhiker's Guide, the third worst poetry in the universe).