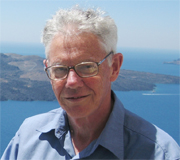 John Biggs is a Tasmanian writer who spent several years in Hong Kong, which results in a distinct Sino-Australian flavour to much of his work. He has published several award-winning short stories, including the occasional Tom Howard award, and four novels. His latest, Tin Dragons, is an historical romance about the hardships and romances of Chinese tin miners in nineteenth century Tasmania. His story "Total Eclipse" is based on a wish that was not quite fulfilled.