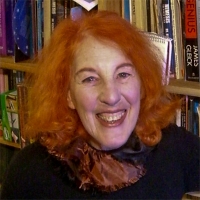 Judith Goldhaber is a poet, playwright, and journalist. As a poet, she has been addicted to the sonnet since the age of 14. She grew up in a 100-year-old farmhouse in New Jersey without electricity or indoor plumbing, but now lives in Berkeley, CA (with both). A collection of 100 poems, Sonnets from Aesop, with illustrations by Gerson Goldhaber, was published in 2005 by Ribbonweed Press, and was awarded the "IPPY" as one of the ten outstanding independently published books of 2005. A second collection, Sarah Laughed: Sonnets from Genesis, followed. Her sonnet cycles have won many national awards, including First Prize in the Anna Davidson Rosenberg Award for Poems on the Jewish Experience; First Prize (twice) in the "In the Beginning Was the Word" poetry competition; Grand Prize in the Dancing Galliard Sonnet Contest; and the National Poetry Review's Annie Finch Prize. Her poems have appeared in The Jewish Quarterly, The National Poetry Review, Astropoetica, The Garfield Lake Review, Prism Quarterly, the Literary Review, and several anthologies and collections. As a journalist specializing in physics and astronomy, she has published over 1,000 articles. As a playwright, she has written the book and lyrics for two musicals based on the lives of great individuals in modern science, focusing on their humanity and little known aspects of their lives. Her musical about Stephen Hawking, "Falling Through a Hole in the Air," received a grant from Paul Newman's "Newman's Own" Foundation, and was produced by San Francisco City College. Her new musical (about Einstein's "lost" daughter Lieserl) is looking for a producer, and two book-length manuscripts of poetry are looking for a publisher. She also juggles a husband and two daughters. Her email address is judithg70@hotmail.com.

Winning Entry: The Curse: A Fairy Tale for the New Millennium