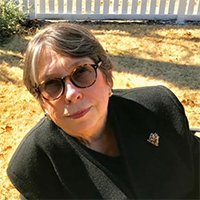 Kathryn Etters Lovatt grew up in rural South Carolina where her family owns a Longleaf pine farm. After a lifetime away, with more than a decade spent as an expatriate in Asia and Europe, she returned to her home state.

She earned her B.A. from Stratford College and her M.A. in Creative Writing and English from Hollins University in Roanoke, Virginia. She worked as a corporate editor and as a journalist prior to moving to Indonesia. She taught creative writing in Jakarta as well as in Hong Kong. She entered a graduate program at Hong Kong University and joined the faculty as a part of the American Studies Department.

A Virginia Center of the Arts Fellow, she is a four-time nominee for The Pushcart Prize and a past recipient of an SC Arts Commission individual artist grant. Her poetry chapbook, Where Comparison Ends, was published in 2021 by Main Street Rag. She lives in a historic home in Camden, South Carolina, and writes in a cottage that was once a summer kitchen.

Winning Entry: Everything Is Normal (Unless You Know Better)