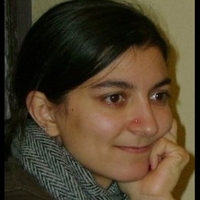 Kayla Macduff spent most of her childhood either outside in nature or inside a martial arts studio.  She holds a black belt in Wu Ch'uan Fa Kung Fu, and has experience in several other martial arts including Tae Kwon Do, Hapkido, Sambo, Kenpo Karate, and Capoeira.

She was raised in Santa Barbara, California, but has spent the last five years of her life in Barcelona, Spain, where she shares a very small apartment with her husband David, son Aleix, and dog Jaleo.

Deadline Tonight! For The Love Of The Craft: A Short Fiction Contest From HBO & The Root; no fee; pick an important time in Black American history and weave a tale of the monsters that litter that time to win $5,000, publication, and mentorship | gomedia.submittable.com/submit/172713/… pic.twitter.com/Rg01waQ9yu